Founded in 1859 by William Henderson Smith. Population of 1,396 Coalville is the County Seat and was originally called "Chalk Creek."

Coalville is a town of rich pioneer history. Like many cities in Utah, the land was 1st settled by Mormon pioneers. A man named "William H. Smith, while freighting through the area in 1858, noticed that wheat spilled from wagons grew to maturity. Where wheat would 'volunteer,' he decided, was a good place for a settlement." 1, page 367.

Taking some of the wheat back to Salt Lake City, he convinced 4 families to return with him to Chalk Creek in the spring of 1859. Other settlers who 1st came to Chalk Creek were Leonard Phillips, Andrew Williams, Alanson Norton, Henry B. Wilde, Joseph Stallings, and Thomas B. Franklin. The desirability of Chalk Creek soon spread and by 1860, fifteen families were living there 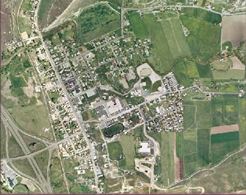 "At first the families lived in tents and dugouts, but as soon as possible they built log cabins. To save bringing so many logs down from the hills, they were satisfied with floors of bare earth and piled up dirt on planks to make the roofs. When it rained, mud dripped through the cracks, and mothers had to hold pans to catch the drips or hold umbrellas over sleeping babies and over food and dishes on the table." 2, page 10.

Chalk Creek's 1st settlers went to work establishing a small community. There were many challenges and a lot of hard work that had to be done. "The endless chores in winter and summer such as milking cows, feeding chickens, slopping pigs, separating the milk, cutting up pig meat, curing hams and bacon, rendering lard, keeping the mutton cool, sawing steaks and roasts from the beef quarters stored in the ice house, churning butter, scrubbing wooden floors, whitewashing log walls, and chinking between logs left little time to loaf." 2, page 160. Along with these every day chores there was a lot of time that had to be spent preparing the land for farming, including the difficult task of digging ditches and canals to bring water to the fields.

Not only were there the challenges of daily chores and poor living conditions, insects, such as grasshoppers were a constant threat to their crops. Cold Creek also endured harsh winters and even freezing temperatures in the Summer that were always a threat to the crops. "Fifty years after the first settlers arrived, someone asked the old-timers present to write down what they best remembered about the early days. The grasshoppers and the frost stood out most in their memories as being the most difficult to cope with." 2, page 12.

During the winter their supply of food became scarce. "Sometimes families had nothing but a monotonous diet of stored wheat for food." 2, page 18.

When situations became desperate people would make the difficult journey to Salt Lake. A woman and her 2 oldest boys "without snowshoes walked a distance of 20 miles…the first day of the trip and continued on to Salt Lake Valley the next day. They rested one day and returned carrying fifty pounds of flour." 2, page 18.

"In times of food scarcity, mothers often went hungry so their children could have more. Emma Lord Robinson wrote that her mother would roll her hands under her apron and hold her stomach to ease the hunger pains." 2, page 19.

Raiding Indians continually threatened the lives and hard work of the Chalk Creek settlers. Because of this danger from Indian attacks Brigham Young counseled the settlers to build a fort for protection. "Following this advice, the Coalville citizens built a fort on the hill above Chalk Creek. They called for all outlying families to come into the central location for protection…When the Indian threat finally subsided, the settlers of Chalk Creek found they liked living close to each other and wanted the social and political benefits of town government. They approved a committee to lay out the town and prepare it for incorporation." 2, pages 27 to 28.

This united group of pioneers worked very hard and Chalk Creek "soon developed into a typical Mormon village as merchants opened up retail stores to supply clothing and groceries to the growing population." 2, page 28.

However, life in many ways was different from the mountain valley settlements. A search for coal began in the area due to a $1000 reward, offered in 1854 by the territorial legislature for finding a coal vein within 40 miles of Salt Lake City. "In 1858 Thomas Rhodes, a veteran of the California Gold Rush who had associated with the Mormon Battalion at Sutter's Mill near Sacramento, California, discovered outcroppings of coal in the Chalk Creek area…By 1867 there were seven mines operating in the area." 2, pages 42 and 47

"During the early days hundreds of tons of coal were hauled, mostly by ox teams, to Salt Lake City, that being the nearest source of supply. It sold for $35.00 to $45.00 a ton." As coal continued to be found more advanced ways of transporting it became available. "By 1873 a narrow gauge railroad, called the Utah Eastern Narrow Gauge, was built to the Wasatch mine. The cars were pulled up to the mine by mules and let down by gravity." 3 page 89.

"Coal mining was hard physical work. Men worked twelve-hour shifts after sometimes walking or riding a horse several miles to and from the mine portal. Men performed manual labor with pick and shovel…The mines closed on Sundays, which were the only break in a long week for the men." 2, page 183. In addition to the heavy manual labor of mining, hanging over the workers heads was the constant prospect of being laid off, not to mention the hazards of working in a mine.

"Because of so many fatal accidents, Coalville was different from other towns because it had a greater share of widows than the average Utah settlement…. The widows and their children struggled along until the sons got old enough to work. Widows wanted to be independent and self sufficient, but there were few ways for women to earn money in that time. Because many widows were reluctant to ask for help unless absolutely necessary, farmers made a practice of leaving certain portions of their fields unharvested so the widows could gather their own wheat, without actually having to ask. Businessmen helped out by offering employment to sons of widows when they had jobs the boys could fill." 2, pages 193-194.

"The many British workers who came to Coalville also made a difference in the character of the population. They had been converted by the missionaries and came in response to the call for men to work on the Union Pacific Railroad construction. Or, they had formerly worked in the collieries of England and the Church agents directed them to Coalville…Although these Britishers were devoted to the Church and loved their community, they never completely divested themselves of their cultural heritage." 2, pages 194 to 195.

"We have learned that the population contained so many persons from Great Britain that Coalville must have seemed like a transplanted Yorkshire village, since so many of the Coalville citizens originated in that county of England. 2, pages 87 to 88.

As time went on the town continued to grow and progress. Log cabins were replaced by brick and frame houses with trees, lawns and gardens. 2, page 199.

The people enjoyed many opportunities for activity and socializing. "Recreational activities increased with organized baseball games, parades, and community celebrations for the Fourth and Twenty-Forth of July. Musical, dramatic and debating societies flourished." 2, page 199.

"The county fair was also eagerly anticipated. This affair gave the stockmen and others an opportunity to display their prize cows, steers, horses, pigs, rabbits, chickens, and other farm animals. The women brought home-canned fruit to display and samples of their beautiful sewing and needlework." 2, page 153.

"The high school also sponsored basketball teams and other sports events, as well as exchanges of choirs, debate teams, and plays with other high schools of the area. Many parents and friends of the students never missed attending every activity as loyal supporters of their young people. Such sporting events helped to make life interesting and pleasant for the citizens of Coalville." 2, page 154.

Coalville became a center for cultural entertainment as well. "The Coalville Opera House, built in 1899, contributed a great deal to the cultural life of Coalville and provided another means of social interchange." A local choir was started by Judith Anderson Beard. "She was still leading the Coalville choir when it was invited to perform at LDS General Conference in Salt Lake City in September of 1935." 2, page 154.

Education for the children appears to have been a great priority. "Coalville residents were highly interested in education and responded to the legislation in support of their schools. They wanted more for their children than the free-lance teachers who ran schools without the organized supervision the county trustees could provide." 2, page 171.

"The Rock Schoolhouse…was begun in 1865 and dedicated September 21, 1869, by President Brigham Young." It "served as a community center, as well as a school. It was also a community theater where plays and musicals brought comfort and relaxation to a toil-worn generation. Located in the center of town so the people could have easy access for church meetings, Sunday School and Mutual Improvement Association meetings, the rock school became a gathering place for dances, socials, and political meetings." "George Beard, a prominent citizen of Coalville, wrote in his journal of the fun of dancing the Virginia Reel at parties in the school house."

One theme runs through the history of those who settled and built Coalville which is best described in a newspaper article of September 16, 1883: "The people of Coalville are just good, honest souls, building a little at a time to that which they already have. There is a solidity (strength) that betokens absolute security." 4 -SEN

Provided Courtesy of the Summit Quarterly