While driving north on I-80, just beyond the Echo Reservoir, you can pass the town of Echo in about as much time as it takes to shift gears. During the mid to late 1800s however, the town was once a bustling corridor for nearly everyone who was venturing westward.

The once eclectic and busy town is nestled in between sharp, steep, red sandstone cliffs. Like a snapshot of the canyons of southern Utah, the geography created the echoes that gave the town its name.

Very little of the towns past remains in Echo today but one building stands in its memory and has been listed on the National Register of Historic Places, The Echo Church and School.

Tall poplar trees line the path towards the small, quaint little building at the end of Temple Lane. Built in 1876 in a Late Gothic Revival style by a carpenter named John Shill, the building's function was originally a church for the Protestants that were attempting to establish themselves in Utah. The building was used as a church on the weekends and as a school for the local children of the area. 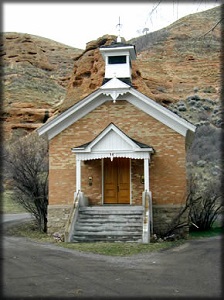 Originally, Echo was comprised of mostly non-Mormon residents. Trappers, hand-cart companies, stage coaches from the Overland Express and eventually, passengers on the Union Pacific Transcontinental Railroad would pass through the craggy cliffs on their way east or west. Residents were eclectic in origin, many residents were employed by the railroad to serve the mining businesses in the area.

As the town grew, a local school district was established and in 1914, a 2 room school house was built for the increasing number of children. The Mormon Church subsequently purchased the Echo Church and School to use for their local church services.

The building is built of hand made brick, fired on site. The structure measures only 25 feet wide by 50 feet long. At one point, as many as 50 children attended the school, their ages ranged from 6 to the mid-teens. Native Americans resided in the valley as well and were known to often play with the growing number of children that lived in the area.

Mary Jane Asper Weaver was the 1st school teacher hired by the local school district in Echo. In 1880 the school underwent some remodeling and to defray costs, Mary Jane donated $4 of her meager $4.50 a month salary to help pay for construction.