History repeated itself on October 11, 2002 when the small post office building in Echo moved to its 3rd location. The last time the building was moved was back in 1956, when all the structures on the east side of Echo's main road moved back to make way for the road-widening project.

The 1st move, however, was almost 30 years earlier. On October 1, 1928, local bishop Moroni Richins was appointed Postmaster of Echo. According to his daughter-in-law Amelda 'Tillie' Richins, he purchased a small outbuilding from Mr. Brims and moved it next to his home.

The previous postmaster Isaac Ferguson had operated the hotel from the town's brick hotel. Tillie remembered collecting the mail there as a teenager, having moved to Echo with her parents in 1925. But with Moroni's appointment, the post office operations transferred to the small outbuilding. 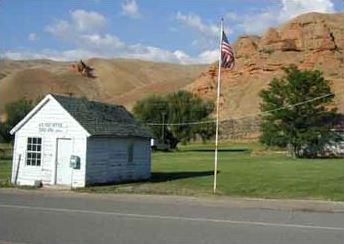 Before he could open the doors, Moroni finished the inside, lining the walls and ceiling with beadboard and installing a service window and postal boxes. It was probably at this time that the building was expanded and the front vestibule attached to the front.

The 1st postmaster in Echo was James E. Bromley, Echo's founder. Congress began awarding mail contracts between the Missouri River and Pacific Coast in 1851 and in 1853 construction began at the mouth of Echo Canyon of the Weber Stage Station, the most important stop between Fort Bridger and Salt Lake City. The next year, James E. Bromley, in charge of the mail service between Pacific Springs and Salt Lake, settled at the station. His numerous wooden buildings soon served as general store, inn, saloon, blacksmith shop and jail.

In 1858, with the suspension of mail service through Utah due to the "Utah War", Bromley guided Johnson's Army down Echo Canyon, past the Mormon fortresses, en route to Salt Lake City. Two years later, in 1860, Bromley hired and supervised riders for the Pony Express between Pacific Springs and Salt Lake. The 1st rider reached his Weber Station on April 7, 1860.

The local history book "Henefer, Our Valley Home" describes young ladies and gentlemen walking from Henefer to mail a special love letter. It was just a short 8 mile walk. With the coming of the transcontinental railroad to Utah in 1869, the mail problem was solved for Henefer, the mail now arrived by train. The mail still traveled by stagecoach from Echo to Provo and points in between: Coalville, Union, Wanship, Rockport, Peoa, Kamas in Summit County and Heber and Midway in Wasatch County.

Mrs. Elizabeth Bromley (James widow) became postmaster on May 25, 1899, according to the US Postal Service Records. She served until February 1915, when her adopted daughter Helen Bowman replaced her. In April 1916, Mr. Clyde Keyes was appointed but he resigned 6 months later and was replaced by Mr. Colorado Perry. Henry Bunot became Echo's 6th postmaster in 1920 and served until 1924, when Isaac Ferguson accepted the position.

Tillie Richins was appointed Echo's postmaster on July 1, 1948, following Moroni Richins retirement. She and her husband William, Moroni's son, purchased the family home and property, including the post office building from Moroni and his wife in October 1954. They supervised the buildings 2nd move in the 1950s. After she retired in December 1975, Amelda continued to rent the building to the US Postal service.

Seventy four years of use have strained the old building. Resting on rotting railroad ties, the building had sunk into the ground. The sill had almost vanished and the wall studs beginning to decay. The building's move on Friday put it on its 1st real foundation and straightened the facade considerably. This is the 1st step towards restoring the building.

A restaurant tax grant provided the funds to begin the project. Summit County Public Works department dug the hole for the new foundation, Albert Richins constructed the footings and foundation, and Valgardson House Movers moved the old building. The project will continue next spring with the installation of a new roof, repairing the original windows, and painting both the interior and exterior.

The building will continue in use as the Echo Post office, open Monday through Saturday from 8 a.m. to 10 a.m. For more information about the building or the project, please call Sandra Morrison at the Summit County Historical Society, 435-336-3015 or Frank Cattelan at 435-336-5642.