Kamas Valley is long and narrow, being 10 miles long and 2 to 4 miles wide. It is surrounded on all sides by low rolling hills. Behind the hills on the east are the Uintah Mountains and behind the ones on the west are the Wasatch Mountains. 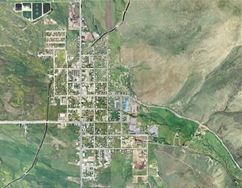 There are 5 main creeks in the valley, the largest of which is Beaver Creek. Beaver Creek crosses the valley diagonally from the southeast to the northwest. It empties into the Weber River just south of Peoa.

Thorn creek is a branch of Beaver Creek. Crooked Creek runs through Marion. City Creek and Indian Hallow Creek start in the West Hills and flow along the western edge of the valley and finally empties into the Beaver Creek.

Scientists believe that the Kamas Valley was once covered with water. The land on which we now live was once at the bottom of a large inland lake. Fossils of water animals have been found to prove this.

Because of the abundance of plant life, animals were found in the valley in great numbers. The streams were filled with fish as well as fur-bearing animals such as the beaver and muskrat. Deer elk, bighorn, sheep, buffalo, rabbit and fox could be found in great number as well as bear, cougars, wolves, coyotes and martin.

It was no wonder then that people found the Kamas Valley an inviting place. Indians were the 1st to come here. They did not build permanent homes, but stayed only for short periods of time usually during the summer months. These Indians belonged to the Ute, Shoshones, and Snake tribes.

The Indians came to hunt and kill wild animals, fish, gather seeds, berries, bulbs, and herbs. There seems to have been 2 large Indian camps in our valley, where the Indians would dry their meat, and grind their seeds and berries. The larger of the 2 camps was located where Kamas Town now stands.

A well beaten Indian trail came up the Provo River, across Kamas Valley, then north easterly along the north side of the Uintah Mountains. To the Ute Indian, Kamas Valley was known as "Yambow" which means the valley of the herbs.

Next to come to our valley were the fur traders or trappers sometimes called the mountain men. They came in the early 1820s for the purpose of collecting furs from the wild animals to sell in eastern markets. After trapping for many months, the fur trappers would all meet together at some "rendezvous" where they would talk, have contests and tell tall tales. One of these rendezvous was held on what was then known as the Kamas Prairie in 1825.

Some of the fur traders who came here were:

They left trails that were followed by settlers that came later and built trading posts that grew into settlements. Thomas Rhodes was the first settler to come to Kamas Valley. He was sent in 1858, by President Brigham Young. He came to build a home, raise livestock, to hunt, trap, and look for gold.

At first he brought 25 men with him. They built a stockade, (where Douglas Simpson's ranch buildings now stand) to protect themselves from the Indians. The stockade stood empty for 2 years and then Thomas Rhodes and George W. Brown returned in 1860.

They were the 1st people to spend a whole winter in Kamas Valley and were followed in the spring of 1861 by more pioneers. Thomas Rhodes built his home west of Tom Simpson's present home (where the small pond is located.) In time the valley became known as Rhodes Valley.

Old settlers still love to tell stories about Thomas Rhodes and his lost gold mine. This mine was said to be located somewhere in the hills east of Kamas. Indians were supposed to have told Brigham Young of a rich deposit of "money rock" located there.

Brigham Young then sent Rhodes and an Indian guide to learn of the secret. Thomas Rhodes was chosen because he knew so much about the Indian language and ways. He had to make a promise that he would never tell or show anyone where the gold was.

It is said that he would always leave alone at night to go to the mine. He rode on a burro and would return after a few days with his saddle bags filled with gold. Some old settlers say that they have actually seen the gold.

Thomas Rhodes became very ill. Realizing that he might die, he tried to draw a map to show his wife where the mine was. She spent two summers trying to find it but could not. Many people since have hunted and searched for the mine, but it's never been found.

As more and more pioneers came to settle in Rhodes valley, the 6 little towns began to form and grow. Peoa, on the north, was said to have received its name from the word "Peoah" found carved on a log which was lying across a stream. Some believe it was the name of an Indian chief.

The town of Oakley was 1st known as Oak Creek for many years. It received this name because a nearby canyon was so thickly covered with oak brush. Later the name was changed to Oakley.

Marion and Francis were both named after Francis Marion Lyman, presiding bishop of the L.D.S. church, when these wards were first organized. Woodland took its name from the many trees or woods that were found growing so thickly along the Provo River.

There seems to be some disagreement as to how Kamas, the largest town in the valley received its name. Some say the name came from a species of wild duck, the Camas ducks that nested here.

Others say it came from the camas plants that grew in the meadows, the bulbs of which the Indians gathered for food. This plant belonged to the lily family and had narrow grass-like leaves and blue-star shaped flowers.

Some people say the name Kamas came from the Mootka Indian word "Chanas", which means a small grassy meadow surrounded on all sides by hills. Still others claim that a man by the name of Kamas passed through the valley in the 1830s, before the coming of Thomas Rhodes.