Before television, radio and even before silent movies, popular entertainment included traveling vaudeville troupes and other companies who would tour the country, presenting shows at local opera houses. Kamas was no different. Built by local John Carpenter, the opera house was located one block north of today's Kamas Theatre. As the frequency of traveling troupes declined, the LDS church purchased the building and used it to present the new craze, silent film.

Friends & Business Partners
In 1924, Douglas and Teen Simpson and Harold and Myrtle Pitt purchased the opera house. Harold and Douglas were school buddies that turned their friendship into a long standing and successful business partnership. 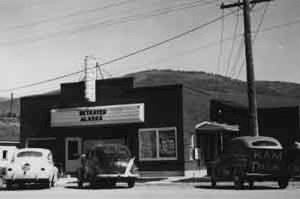 In 1920, they built and opened the Kamas Confectionery (now the Hi-Mountain Drug) with plans to debt free in 5 years. Their goal actually took 22 years to achieve. Not that the confectionery wasn't profitable, the partners just seemed to find other ventures to invest in. One was the Kamas Opera house.

They brought the first talking pictures to Kamas. Business at the Theatre was good, talking movies were all the rage of the 1920s and 1930s so locals were willing to pay to see this new invention. The movie house weathered the Great Depression only to burn to the ground in 1942. "$25,000 loss ---$1,000 insurance" is how Douglas describes the fire in Kamas Valley, Pearls of the Past (compiled by the Rhodes Valley Daughter of Utah Pioneers). "But no one was hurt, thank goodness.

Harold was more interested in the timber business and he didn't want to go with me in building a new theatre, so Glen and Gwen Gibbons and Teen and I built the new theatre." They built it on the lot just south of the Kamas Confectionery (see photo). Douglas and partner Harold had purchased the corner lot on Main Street and the yet to be completed Mirror Lake Highway about 1928, much to their bank managers chagrin.

Sold to the highest bidder, Douglas and Harold paid $15,000. They were concerned someone else might use the property to build another store that would be direct competition for their confectionery. Banker, Mose Taylor, lectured the 2 concerning their mounting debt but the future would justify their action. They later built and leased out a gas station on the corner to service another new invention, the motor car. And their location was excellent, everyone was motoring the new excursion, the Mirror Lake Highway.

The new theatre cost $60,000. "Everybody thought we were crazy, but it worked beautifully and everyone loved it" remembered Douglas. Attendance was so great the building was almost paid for in 9 years. Another invention arrived in Kamas but this time to dampen their success. "Television came to town. We thought another depression had hit, but it wasn't a depression this time, it was television. Everybody quit going to the show and for the next nine years we didn't make a cent in the show business, but we did keep it running. Then business got a little better, and we started making a little money."

In 1972, after 50 years in "show business", as Douglas referred to the Kamas Theatre, Douglas and Teen sold out their share to partners Glen and Gwen Gibbons. Born in 1899, Douglas had not only witnessed, but shared a dramatic role in the technological advances of the 20th century. "I think being born at that period of time made my life very interesting and exciting because, it seems to me, that everything we have now has been invented and developed during my life," Douglas wrote in March 1977. Douglas and Teen Simpson experienced the huge changes that occurred in the American way of life in the last century and, with their business ventures, changed the way of life for everyone in Kamas.