Early settlers of the Kamas area or Rhodes Valley, as it was then known, were not the 1st to recognize the value of the fertile valley. It was also vital grazing habitat for the deer, elk and other animals that Native Americans depended upon to survive. Local Indian tribes had long used the area for hunting and were naturally reluctant to lose it.

By 1866, relations had become tense and the settlers built a fort for protection. The fort, built of logs, was 30 rods square with walls 16 feet high and gates on the east and west walls. Upwards of 47 families have been reported living inside the fort. Sarah Ellen Neibaur O'Driscoll remembered 27 families living there when she and her husband John arrived in June 1869. 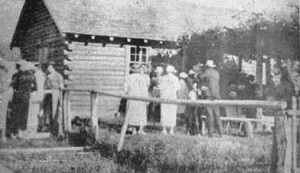 Though there were some confrontations between Indians and whites in Summit County, it seems these incidents were the exception, not the rule. The following story appears in the Rhodes Valley DUP book "Kamas Valley: Pearls of the Past."

The Indians made a raid on the settlers horses and an Indian boy was captured, taken to the fort and chained. When the chains were removed the next morning, the boy escaped but was shot in the hand by one of the settlers. He was able, however, to rejoin his tribe on the Weber River. After several days, a large group of Indians returned to the fort and demanded food in payment for the injury. After receiving a beef and other supplies and feasting with the settlers, they returned to their tribe.

The establishment of the Uintah Indian Reservation in the Uinta Basin in 1861 and a series of Indian treaties beginning with the Spanish Fork treaty of 1865, moved most Indians away from the towns and villages. White settlers abandoned the Rhodes Valley Fort in 1870 and surveyed the surrounding land. Dividing it into lots, they created the new town of Kamas.

Sixty-seven years later another log building appeared on the site. The Rhodes Valley camp of the Daughters of Utah Pioneers (DUP) erected a relic hall to house their collection of pioneer artifacts. On April 25, 1933, Mercy Amelia Pack Sargent, a granddaughter of John Pack, 1 of Kamas founding fathers, called a meeting of other Mormon pioneer descendants.

That 1st meeting on May 10, 1933, was a veritable who's who of Summit County pioneer's descendants. Edna Beard Taylor was daughter of George Beard, well known Coalville photographer and artist. Sarah Ellen Neibaur O'Driscoll, probably the oldest woman present, had moved from Salt Lake City in 1869, after her sister Birtha's husband Levi Pangburn had died.

Sarah and husband John O'Driscoll took over the couple's Kamas property including "an old wagon, a pair of small ponies, one cow and one acre of wheat." In 1897, Inez Pack Hoyt had married John Hoyt, son of Hoytsville founder Samuel Hoyt. John served 4 years as Summit County Commissioner and was a partner in establishing the Kamas State Bank.

The new DUP camp flourished and in just 4 years built their own cabin. It stands today on the site of the original fort and inside is housed a scale model depicting the fort's layout.

By Sandra Morrison
Located: Corner of 100 West and Center