This was 1 of 3 "ward-style" (as in political wards) public schools built in Park City during the 1880s and 1890s to meet the demands of a growing school population. It is the only 1 of the 3 standing today.

Completed in the fall of 1889, at 543 Park Avenue, at a cost of $13,000, it originally was called the Central School or Building Number 1 to distinguish it from buildings 2 and 3. In 1897, in order to eliminate confusion, the 3 schools were renamed the Washington, the Jefferson and the Lincoln. The Washington School was built of limestone quarried from nearby Peoa, which enabled it to survive the Great Fire of 1898.

Called 1 of the finest schools in Utah, it operated until 1931, when it was closed because of declining enrollment. It was sold for $200 in 1936, to the Veterans of Foreign Wars who used it as a meeting lodge and social hall until the 1950s. In 1936 the Marsac Elementary School was completed and the 3 schools consolidated there. 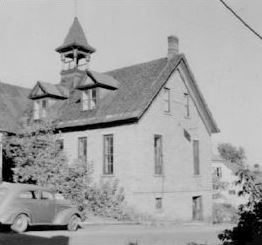 During hard economic times the VFW was unable to maintain the building properly, and in 1970, it was sold to an investment company who planned to make it the centerpiece of a condominium project called Lodestone. When that failed, it was purchased by a local developer who remodeled it into the Washington School Inn. The school is listed on the National Register of Historic Places.