The town of Atkinson was named for William Atkinson, one of the original homesteaders in the area that also included Orrin Hatch, George Pace, and John Moss. George Pace had originally settled in Bountiful, establishing a large dairy herd as well as raising beef and sheep. "It soon became apparent to them that they were going to be overcrowded with people in that area," remembered grandson Angus Pace. "So they looked for some other place to establish." 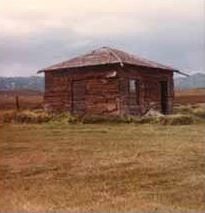 After Parley Pratt opened the "Golden Pass" route up Parley's Canyon, the Snyder family settled on the western edge of the large meadow. Grandfather came out and discovered the Snyderville area, which at that time was pretty well settled. So he went another 4 or 5 miles to the Silver Creek area.

Several of his sons moved to the new area and soon the entire family was working their large ranch. Capacity increased with the discovery of silver ore and settlement of Park City. An eager market was close by for the Pace family to sell their dairy and meat products.

Transportation to the thriving town of Park City from Atkinson farms improved with the arrival of the Union Pacific's Echo and Park City Line in 1880. The Union Pacific purchased land and established a freight station and 26 pen stockyards, calling their new stop Atkinson. Livestock was driven from Snyderville and as far a field as Heber, to be loaded at the station.

The creek flowing through the area, Silver Creek, originated in the Park City mountains. With rapid mining and ore processing development, Silver Creek soon became contaminated. The mine waste flowed downstream, depositing tailings all along the streambed.

By the early 1910s, milling techniques had improved so that the valuable minerals washing downstream could be recovered. In 1911, E.J. Beggs (contractor for the Summit County Courthouse) was hired to construct the Miller Mill on the outskirts of Park City (the area is now Prospector Square) to process the large quantity of tailings located there. Four entrepreneurs, 2 engineers familiar with the new milling techniques and 2 geologists arrived in Atkinson with the idea of recovering the now valuable tailings.

By 1915, their mill named The Big Four, was up and running at an estimated cost of $250,000 to $350,000. It seemed that instant prosperity would come to everyone and the company owners became town heroes. "They hired a number of families and built small dwellings for them," remembered Angus Pace. "I was told that they had a big boarding house there, where they furnished board and room for the single men who were attracted to work at the Big Four."

Need of a School

The town grew overnight. "They had enough families" explained Angus "so the Big Four convinced the South Summit School Board to come over to Atkinson and put up a school so for their employees' children. The Pace family and surrounding farmers were included and I attended school at the Big Four when I was very young."

One of the 1st teachers at the 1 room school was Miss Douglas. She boarded at a local boarding house run by Japanese immigrant Mr. "Ike" Kow. Kow was also the Union Pacific section foreman for Atkinson in 1920 and offered lodging mainly for other railroad workers.

By the time Angus reached 1st grade in 1921, the local teacher was Miss Thompson. "We lived about a mile from the school. It was a one-room schoolhouse with eight grades and one teacher. The teacher lived with us and my dad furnished her a horse to ride to work. I was so young, I used to ride with her." Angus remembered about 20 children attending school. "She had her hands full trying to teach a little bit of reading and arithmetic to that many students."

End of the Mill & School

The design of the Big Four mill was apparently so efficient it was duplicated. On July 17, 1915, the Park Record newspaper reported the proposed construction of the Broadwater Mill. "Kirk and Leavell, who constructed the Big Four mill at Atkinson, will make this one a duplicate, but twice the capacity. Life expectancy of these concentrating mills was short: "it is expected that it will require two and one-half years to treat the immense tailings dump." The Big Four was sold in 1918 for $35,000.

The school still stands today, along the rail bed of the Union Pacific railroad. Life has been hard for the old school building since the last children bolted and the teacher closed the door. Angus moved the building into a field to provide shelter for his cattle. The building serves as a reminder of the optimistic town of Atkinson that has vanished.

By Sandra Morrison
Located along Rail Trail and south of Interstate 80.