From 1824 to 1825, William Ashley, Jedediah Smith, Jim Bridger and Kit Carson stopped at the numerous springs near Peoa. Named from a word found carved into an old log in 1857, Peoa at one time had a hotel, store, and blacksmith. Cattle and dairy farmers also grew lettuce and peas for sale to the miners in Park City.

In 1825, William Ashley's party of trappers rode across the Kamas Valley to the Weber River, and on to Echo Canyon and Wyoming. An old Indian trail followed the eastern foothills. Early visitors found a Spanish canon in the middle of the valley, abandoned during their search for gold. At Oakley, Thomas Rhodes built his home on the banks of the Weber River in 1853.

In 1868 first William Stevens became the permanent settler in what was called Oak Creek, then Oakley. In 1859, Thomas Rhodes settled at a spring at the base of Hoyt's Canyon near Marion, Samuel P. Hoyt established a ranch in 1861, his herd of over 600 cattle was one of the largest in the territory. In the 1940s there was a cooperative pea vinery here.

The Town of Kamas

The town of Kamas was settled in 1857 at the mouth of Beaver Creek Canyon by Thomas Rhodes. He operated a sawmill, grazed cattle, and gave his name to the valley. In 1867 a log fort was built for 32 families for protection during the Blackhawk Indian Wars, and vacated in 1870. Kamas grew with flour mills, creameries, a bank, hotel, movie theatre, undertaker and garages. 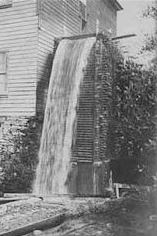