The first roads in Summit County, as in other pioneer sections of the west, were a far cry from the highways over which our cars now speed. They were primarily wagon roads and horse trails, following the lines of least resistance. As travel, communication, and industry increased, the need for better roads became paramount.

Probably the first necessity for roads was that of communication -- the carrying of the United States mail. In early days the delivery of the mail was a task requiring much effort. All mail routes were typical -- in the summer the delivery was comparatively easy. In the spring and fall the roads became churning masses of mud through which the horses would wallow to their bellies', dragging buggies and wagons whose bottoms scraped in the mud. Winter brought heavy snow fall, deep unbroken drifts of snow, howling winds, and bitter weather. Self-preservation became a factor then, as well as the delivery of the mail. It was many years before roads in Summit County were developed to the point where spring, fall and winter travel ceased to be hazardous.

The first U. S. mail to go to Salt Lake City through Parley's Park was in January 1860. From all indications this road must have gone through "Three Mile Canyon." A post office was established in Wanship in 1864. It was not until 1870 that the mail went from Echo to all the communities' south in Summit County.

The following is a copy of a memorial to the Honorable Alexander W. Randall, Postmaster General:

Your memorialists, the Governor and Legislature of the State of Utah, in view of the rapid development of the settlements in Summit and Wasatch Counties, desire the corresponding increase and change of mail service as named in this memorial: From Echo City in Summit County to Provo City in Utah County, a semi-weekly, a distance of 70 miles via Coalville, Union, Wanship, Rockport, Peoa, Kamas, in Summit County; Heber City and Midway in Wasatch County, to Provo City in Utah County. Your prompt and favorable consideration of the foregoing memorial is most respectfully solicited and in duty bound, your memorialists will every pray.
Signed, February 17, 1869.

One of the earliest records of road building is found in "Founding of Utah," page 23: "In 1855 the Provo Canyon Road Company was incorporated by the Governor and the Legislature and authorized to build a road to the mouth of Provo Canyon through what is known as Kamas and eastward to the main traveled road from the Missouri River to Great Salt Lake City and keep same in good repair." This was the old Weber Canyon Road.

On March 9, 1861, the first division of the County into precincts was named as follows:

Precinct Number 2. From Bradbury's to bridge across 3-mile canyon.

February 17, 1862, we find the following precinct divisions in the County:

May 7, 1862. The court proceeded to set the County into six road districts with a supervisor over each. These supervisors were: Jacob Huffman, John Jones Allred, Stephen Nixon, Orin S. Lee, Charles Rupell, and William H. Kimball.

May 8, 1862. A petition by the court to Samuel and Newman Williams to build a good road into East Canyon on the west side, about 2 miles below Ferguson's.

July 8, 1865. A petition granted citizens of Peoa and Three Mile Canyon a free bridge and County road on the east side of Weber River.

September 3, 1866. Report of road commission locating a road between Peoa and Wanship was accepted and the road ordered to be opened.

April 1867. Location of the county road at Rockport was considered and agreed upon.

Another important factor in the building of roads was the enactment of the pole tax law. This law was approved January 16, 1860 by the state legislature. It required that every male inhabitant over 16 years of age and under fifty years of age, donate two days of labor, at $1.50 per day. This labor was to be performed in the limits of the counties on any territorial or county road under the direction of a supervisor.

In days when cash was scarce and roads were so important in the development of the county, the poll tax played an important role in helping to build roads. Many boys high school age made the money to attend high school by going to the tax payers and arranging to work out their poll tax and thus receive the $1.50. This seemed to be the custom in many towns, and Mr. Raddon of the Park Record tells that it was especially prevalent in Park City. The poll tax did much to improve the roads as work was done on the trails which were being used.

The poll tax went through various changes. In 1870 the age was raised from 50 to 60 years, then again lowered to 50 in 1901. The age was also raised from 16 to 21 years. In 1909, the National Guard was exempt. In 1911, every soldier and sailor who was in the Spanish American war was exempt. It appears that either the poll tax was not enforced in the last years of its life or was paid in cash as the price of wages increased and $1.50 became small wages for a day's work. It seems that inhabitants whose memory goes back to 1890 and the early 1900's remember the poll tax but later they do not.

Another means of helping to finance the building of bridges and roads was the erection of toll bridges and toll gates.

The Deseret News for May 29, 1861, contained an interesting column. It mentioned the progress of settlements on Weber River and that range for livestock was reported good. "A good bridge has recently been built over the Weber River some five or six miles below the mouth of Silver Creek, which although not so expensive and elegant as some which have been constructed in Utah, Great Salt Lake, and Weber counties, is pronounced a substantial structure by those who have crossed it. Another bridge is being built over the same stream a few miles above Silver Creek which is shortly to be finished."

Apparently there were three toll bridges across the Weber in 1861.

On June 16, 1861, the Deseret News again reports of this bridge, "The bridge across Weber was broken down a few weeks since and has been rebuilt."

March 6, 1865 the County Court granted to Henry W. Brizze and Henry S. Alexander the right to construct a road to run east and west and to be in the most feasible place across the Weber River in the town of Wanship and a grant for a toll bridge or bridges across the Weber River was approved. This bridge was completed May 15, 1865 and was located at Wanship where the old traveled road crossed the river. The company was to hold the bridge and keep it in good repair until they had received the cost of construction and 50% over and above expenses.

Rates of toll were as follows:

The territory of Utah seems to have taken over the jurisdiction of this bridge for on January 18, 1867 the toll rates are lowered.

Five percent of the toll collected to be paid to the Territorial Treasury for the benefit of common schools. In eight years the bridge to be turned over to Territorial Road Commissioners as property of the Territory. Approved January 18, 1867.

The rate of toll was again lowered until toll rates were:

On July 8, 1865 W. H. Kimball was granted the right to collect toll on a bridge he had made in Parley's Park. He charged 25 cents on all freighters. Citizens of the County were to pass free. In March, 1866, this petition was revoked. Tolls were sometimes collected by individuals on their own property from persons crossing. It appears that was done independently of the county and they could collect over an undetermined period of time.

The legislature on January 19, 1866 approved an act establishing a territorial road from Great Salt Lake City to Wanship, Summit County, appropriating $6000 for building it. It was to lead up Big Canyon, over Parley's Park. Across East Canyon creek near Fergeson's settlement, and through Parley's Park to Kimball's Ranch. Then over the Summit and down Silver Creek Canyon to Wanship. This road was divided into four sections and toll gates were to be erected one to each section. The sections were divided as follows:

2nd section—Hardy's to crossing of East Canyon creek near Fergeson's. 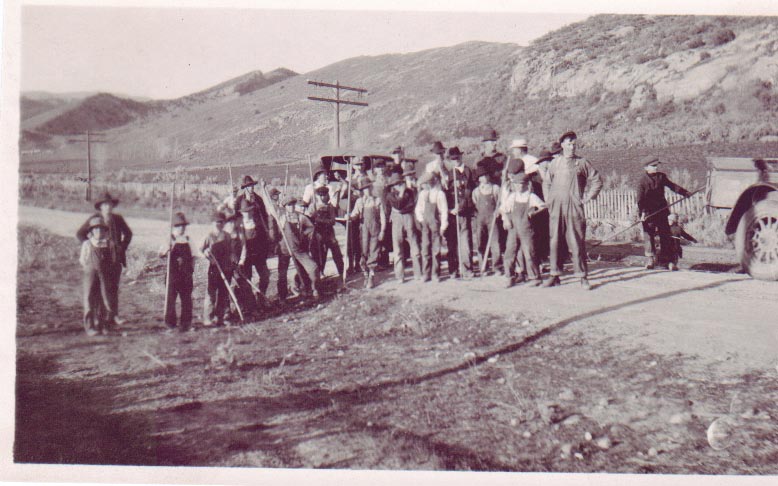